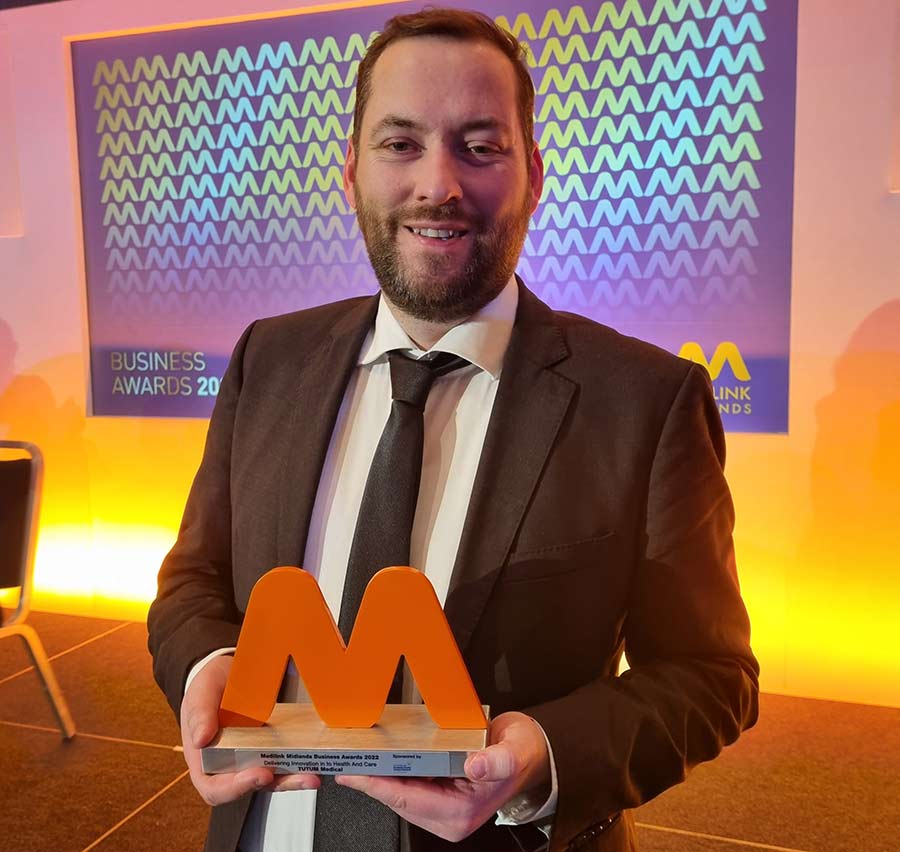 We are proud to announce that Tutum Medical from Chesterfield has won the Delivering Innovation in to Health and Care Award 2022 at the Medilink Midlands Business Awards and will now go forward to the prestigious national Medilink UK Healthcare Business Awards in June 2022. Tutum were also a finalist in the Advances in Digital Healthcare Award.

The Award is for the development of BEAMS (Bedside Equipment Critical Alarm Monitoring System), the only acoustic monitoring system for all critical bedside alarms, to improve response times to situations quickly and efficiently for improved patient outcomes, better workflow for staff and to reduce healthcare costs.

Bedside alarms in single-patient hospital rooms are increasingly going unheard by hospital staff (this has been exacerbated during Covid with more single bed rooms and closed wards for infection control), leading to major incidences, such as: Patients failing to get the prescribed amount of medication; Deterioration of patient’s health; Serious injury and even death.

Paul Rawlinson, Managing Director of Tutum Medical Ltd said: “Winning this award is fantastic and a worthy accolade to everyone involved in developing the unique BEAMS monitoring system. I would especially like to thank Sheffield Children’s Hospital who initially approached us to develop this system for them, and to Professor Derek Burke and Sue Ievers who have been outstanding in their support and encouragement at the hospital.”

With larger wards and more soundproof, single occupancy bed rooms planned for the new wing at Sheffield Children’s Hospital, a demand arose for a bedside equipment monitoring system. The hospital approached Tutum Medical Ltd to develop a suitable system. The successful BEAMS system has now been installed in 70 single occupancy rooms across six wards in the hospital and improves response times to equipment alarms and helps ensure alarms do not go unheard. BEAMS has reduced the number of alarms taking >2 minutes to respond to by 78%; >5 minutes by 88% and >10 minutes by 95%.

“We are currently undertaking free BEAMS trials at a growing number of UK hospitals and hopeful of many more orders in the next few months,” explained Paul Rawlinson, “With a BEAMS system installed you can keep your patients safe by ensuring that staff are fully aware of all bedside alarms, even if they cannot be heard behind a closed door. BEAMS lets staff know where the alarm is sounding and which alarms are a priority, so they can prioritise patient care.”

The Medilink Midlands Business Awards is an annual event bringing together the Midlands Life Science community to celebrate the achievements of companies from across the regions. The Delivering Innovation in to Health and Care Award is sponsored by the West Midlands and East Midlands Academic Health Science Networks (AHSN), for an innovation that is being adopted by the NHS and that has demonstrated an impact on efficacy, patient outcomes and NHS system costs.